The trike was the first vehicle i ever made. It was built in one week in the time i had left after school, using no welding as the welder had just been stolen. I believe i was 14 at the time.

It was impossible to drive, horribly unreliable, and uncomfortable. But it was still awesome and i enjoyed it greatly. 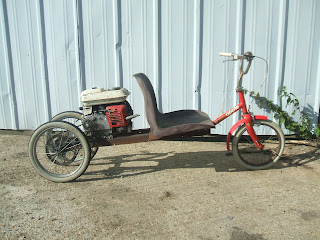 It had a 67cc 2.8hp Honda general purpose engine on the back, half a stacking chair as a seat, the front half of my sister's old bicycle on the front and the wheels off my old bicycle on the back. The rest of the chassis was made out of some bed frame. The throttle was a piece of string you wrapped around your hand. The whole front end was put on badly so it was tilted to the right, which meant you could only turn right at speed without falling over. It was so hard to drive i could never find anyone else who could drive it more than 2mph. with a good run up this could make 10 or 15mph which is plenty fast enough.

The best part of the build i remember was when it first moved under it's own power. As it was the first vehicle I had made, I remember the great excitement of it slowly trundling a few feet before the chain fell off (a recurring problem through out it's life).

This whole project was inspired by my mate's mini motorbike which we had been riding up and down his garden. it was great and i really wanted one, buuut i had no money so this was the next best thing.

It has long since been dismantled. most of the back end was re-used in the Snow tug