About a year and a half ago, shortly after I'd started sixth form, I accidentally joined the school earthquake club (They had free biscuits, ok?). Now The school had a seismometer riged up to an old computer in the school lobby, with a monitor mounted on the wall displaying all the data over the last 24 hours.
Now one of the problems faced by the earthquake club was that they had about 3 years worth of data, but no real way of analysing it other than a fairly crude piece of software which came with it. The main problem was with identifying earthquakes against other miscellaneous spikes. So i gathered up all the data on a memory stick, took it home, and wrote a little piece of code to convert it all into a sound file so you could listen to it. This suddenly made it much easier to work out what was an earthquake, as they had a very specific sound to them. This is the converted file made of the March 11th Japan earthquake of last year to give you an idea what I mean.

Now having looked over the seismometer my self, it didn't seem to be much more than a magnet and a coil of wire attached to a sprung frame. So in my usual way I said to my self, 'I could probably make that' and proceeded to spend that weekend making myself seismometer. 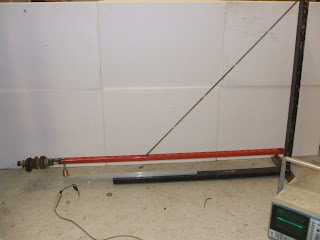 It wasn't a pretty affair; it was mainly constructed from a shake-to-charge torch, a bit of shelving bracket and some steel from an old horse box, but it did work. it could even detect me drumming my fingers on the floor the other side of the room! 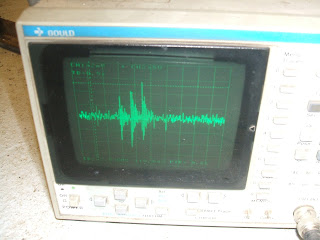 I managed to get a data logger on loan from the company who ran the school seismometer, and set up a computer to record the data. After a few calibrations, it worked pretty well. not nearly as well as the school one, but still picked up various big earthquakes like the aforementioned Japanese earthquake. However the loan on the data logger ran out recently, and so the seismometer is currently packed up in my shed, where it will probably stay.
Posted by Rory Mangles at 17:26 1 comment: