Winter 2010 saw the rare event of it actually snowing enough to be fun. Sliding down a hill on a toboggan is all well and good, but then you have to pull it back up to the top again. So i quickly designed a snow tug, and gave myself a day to build it. And at 11:30 that night, I wheeled out : 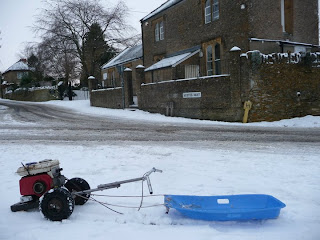 It was great, 15mph on a toboggan is pretty darn quick. So as a proper test i drove it down the icy lanes to our near by village (which is where the photo was taken). Here i spent the day whizzing up and down the street much to the amusement of passers by. From this i discovered two main flaws. One was the lack of grip, so you would grind to a halt at the slightest incline, and two, the wheels would spray you with a snowy mush which meant you couldn't see. I therefore simply fitted mudguards, and wrapped chicken wire around the wheels like snow chains. It could now pull you up relatively steep hills, without the icy shower; Power slides on a toboggan is one of the more exiting things I've come across :)

Once the snow had melted i made a sort of wheeled toboggan and removed the chicken wire. The new vehicle looked bizarre as you had to put your feet up on the engine and have the handle bars between your legs, but it was great fun to zoom about on. unfortunately one of the tires on the wheeled toboggan burst beyond repair, so i'll just have to wait until it snows again.

This is a video of me driving it into the yard and power sliding sideways, which was always awesome, however this time i over did it and fell off!
Posted by Rory Mangles at 23:08