I had been looking at building a powered bicycle for some time; a quick and easy way to make quite a cool vehicle. So in the winter of 2009, i went out and bought a chainsaw engine for £10 from a local guy who I buy most of my parts from. I then set about attaching it to the bicycle i bought for the purpose for £5 a month or so before. It was a relatively easy build, i can't remember encountering any huge problems in the construction other than having to go back 3 times to find a working magneto to get the engine going. However my first attempt, as shown below, wasn't geared low enough, so it took an age to get going. 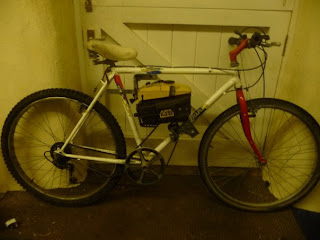 So the next day i set about attaching a second lay shaft which doubled the gear ratio. 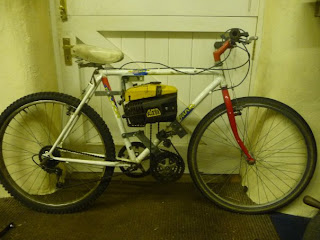 The main problem now was getting the chains to stay on. It was a recurring problem with this vehicle that was fairly predictable with 3 separate chains and lack of precision, but once you managed to set it up right it went along nicely, and with the five gears on the back wheel usable, you could get it up to quite high speeds.

I once managed to fall off it spectacularly whilst going round an icy corner fast (with no helmet on :s ). Hurt like a b*tch but surprisingly it still worked fine after i put the chains back on. Sadly though, when welding the drive sprocket onto the clutch, the metal must have annealed, so when the chain slipped as it sometimes did, it would ware down the teeth on the cog meaning it would slip more which meant it wore down the cog more... eventually i was left with a completely smooth tube where the cog used to be.

If you wat to see it working then the here's the link for a video: http://www.youtube.com/watch?v=0MwvWK-_vQk

Ok so it's a year later now and I've finally got round to fixing the cog (only took a few hours). I had forgotten what an awful piece of engineering it was. I'm amazed it even moves at all!! but i managed to get it going pretty well and fitted a bike speedo. It even ran long enough to do a speed run: http://www.youtube.com/watch?v=qO-hxl4AYaE
In this vid i got it up to 24.5 mph, but I've hit 30.4 before, and that was in 5th (it has 6 gears but only a five speed selector atm). However having only 10hp per ton, acceleration isn't huge.
Posted by Rory Mangles at 22:41