This, in my opinion, is my best machine to date. Not necessarily the best engineered or the best designed, but by far the most fun! Built in 2009 when I was in year 10 this was my second vehicle to be built after the trike, which was a little special...


years and years ago I got lent a book by one of my Mums friends called ' Build Your Own Off-road Buggy for as little as £100 '. I used to read through it regularly and kept asking my dad to build one, but unsurprisingly he wasn't too keen. Then, in early 2009 a friend of mine offered me 3 motorbike engines for £50 that he recently had taken out of his own buggy (built from the same book as it turned out). It was a good bargain so I snapped them up with little idea of what I was going to do with them. Then I remembered the book. So that Easter holiday I got started. It was a very steep learning curve as I had never done anything particularly complex before, and had only just learnt to weld. I got a whole load of steel off cuts from the local engineering shop, and a lot of box section from an old horse box we'd recently destroyed, and started work. The first bit wasn't too bad, just welding up the basic frame shape from the measurements in the book, but then it started to get more complex with the steering.

We'd recently cannibalised our old lawnmower tractor for parts, so I nicked the wheels and front steering mechanism off that. However all of the steering rods on that thing were worn to nothing. Fortunately, my cousin worked down the road at Ariel Motor Company, and so was able to get a couple of old track rod ends from them, which made it a little easier. I then had to work out all the geometry's in such a way that didn't get in the way of your feet, or lower ground clearance. The mechanism I ended up with was far from neat, but it seems to have done the job fairly well so far.


Next (I think, was a while ago now!) was the seat, which was also far from neat. I planned on using the springs from the lawnmower seat to counter the lack of suspension, but these had to be attached to the glass fibre Atom seat that was again supplied by my cousin. It was out of a crashed Atom so half of it was pretty broken, but the other half was almost complete. So the broken side was cut off and this was then mounted on top of the lawnmower seat with a single bolt, and then expanding foam was used to hold it in place. It is an almost painfully bad piece of engineering, but it does the job.


Next was the engine, which was easy enough as the one I wanted to use already came in a rear subframe from my friends old buggy. There was a lot of debate as to whether I should have suspension or not, but I finally agreed to put it in (which was a good move as it puts less shock loading on the rest of the vehicle). So two bolts were used to hold it in place on a pivoting join.


The back axle was one of the hardest (and most expensive) part of the project. it came from one of my dad's friends, and was the back axle out of his camper van (or something like that). Unfortunately it was a different size to both the bearings I had and the back wheels, so I had it sent to a professional mechanic who had it machined to size at either end. Then I had to fit the rear cog, which had been bought from a local bike shop, which was mounted on part of an old bearing. This actually worked pretty well as it turns out. This then all had to be mounted with the bearings onto the rear subframe and connected to the engine.

All that was left to do was the rear suspention. All this consisted off was a pair of rear mororbike shocks attached between the main frame and a plate above the rear bearings. Simple, but reasnobly effective. 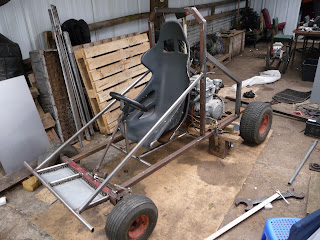 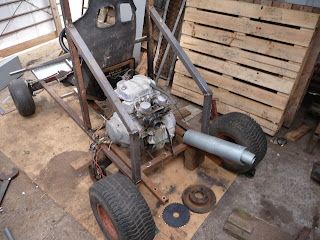 This all took 5 weeks from start to first drive (although it was still hardly finnished) and had cost £125. I havent a clue how your supposed to do it for £100 as most of the parts i had already or got free!

A bit of driving

Despite the poor build quality, this thing is awesome to drive! The sheer volume of the engine is impressive enough (i actually got complaints from the neighbours about the noise, and they live about half a mile away!)
It has big problems with understeer as you would expect what with having no diferential, although it is now fitted with brakes. which is a job I've been putting off for the last 3 years. The handleing leaves something to be desired, but for sheer driving awesomeness it is brilliant!